USWNT’s equal pay settlement was announced with a celebratory tweet and Facebook post, but will new CBA legislation be able to live up to the hype? 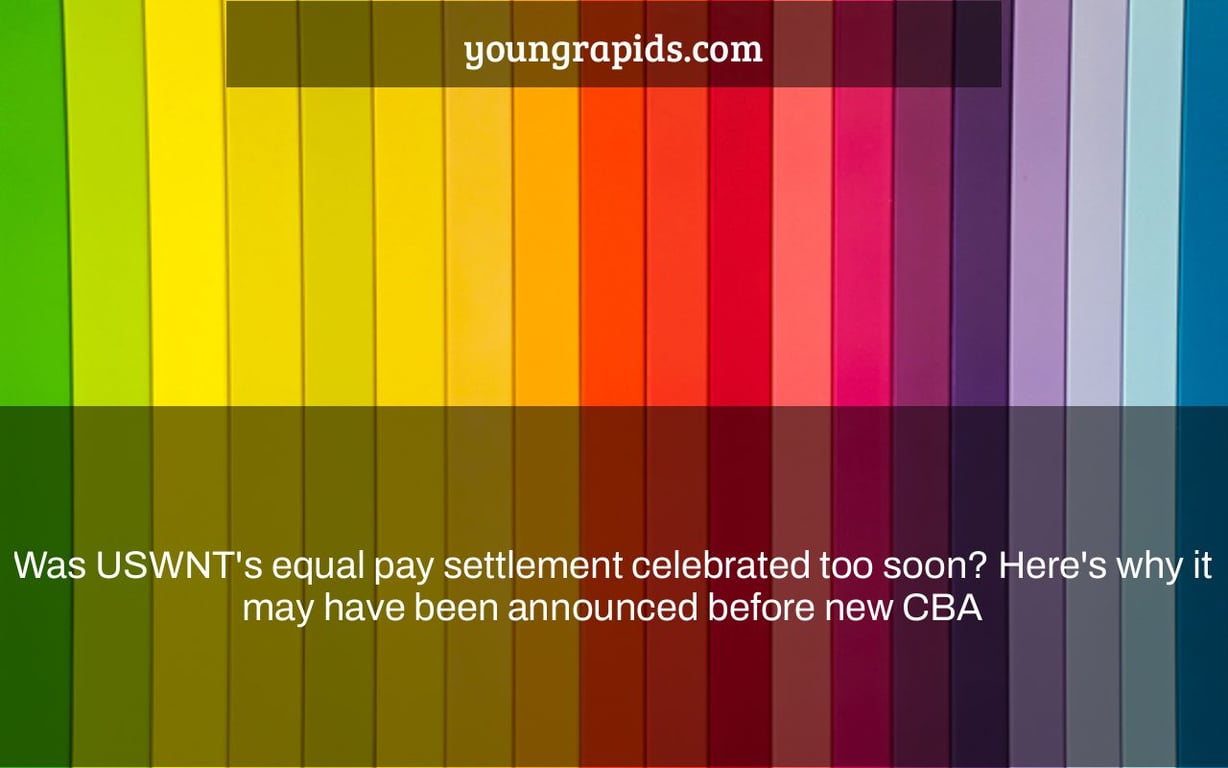 On Feb. 22, the United States Soccer Federation and the players of the United States women’s national team announced a settlement of the class-action equal pay lawsuit launched by the players against U.S. Soccer. The players will earn $22 million in addition to a $2 million fund that will provide players with up to $50,000 in awards for post-playing work that benefits women’s and girls’ soccer. In addition, US Soccer pledged to give “an equivalent rate of remuneration for the women’s and men’s national teams in all friendlies and competitions, including the World Cup” in the future.

Although significantly less than the $67 million requested by the players, it was more than they could have hoped for after the District Court dismissed their pay equity claims and handed U.S. Soccer partial summary judgment on the equal pay claims in May 2020. The court agreed with US Soccer that the indisputable facts surrounding the equal pay allegations were so apparent that the federation was entitled to judgment as a matter of law and could avoid a trial, forcing the players to attempt to appeal.

As a result, it’s not unexpected that the news of the settlement was widely publicized. Alex Morgan and Megan Rapinoe were among the players that spoke to the media and conducted a victory lap with U.S. Soccer president and former USWNT star Cindy Parlow Cone. Rapinoe subsequently predicted that “this would fundamentally transform the landscape of the women’s game in the nation forever.” Morgan termed it a “monumental stride forward.” Cone repeated similar sentiments in her speech to U.S. Soccer’s annual general meeting the following week, calling it “a significant triumph for U.S. Soccer and our women’s players” with “far-reaching long-term advantages for everyone.”

The resolution is conditional on the parties negotiating a new collective bargaining agreement, which was lost during the collective applause. This entails more than just bargaining with the USWNT Players Association. The only way to fix the gap in World Cup prize money — one of the most contentious topics in the case — “is for the men’s squad, the women’s team, and U.S. Soccer to come together and achieve an agreement on equalizing it ourselves,” according to Cone. The prize money for the 2022 men’s World Cup in Qatar will be $440 million, whereas the prize money for the 2023 women’s World Cup in Australia and New Zealand will be about $60 million.

That begs the question: if obtaining a CBA agreement was critical to the settlement, why would they announce it before the CBA was completed? At least three reasons are plausible.

1. The transaction is ‘almost complete,’ but the announcement couldn’t come soon enough.

One option is that the transaction is almost completed, but they decided to disclose it ahead of schedule due to other events.

On the appeal, there will be an oral argument.

The most obvious motive for making the announcement early is to avoid the players’ appeal hearing, which was planned on March 7. The parties avoid both the legal expenses involved with preparing for and participating in the oral argument, as well as any bad press coverage based on remarks made during the argument, by settling two weeks in advance (not quite “on the courtroom steps,” but close).

Furthermore, it eliminates the chance that either side would alter their minds about the settlement after learning how the judges will examine the attorneys during oral argument.

The presidential election in the United States of Soccer

The annual general meeting of US Soccer began on March 3, and the parties achieved a couple of significant goals by publicizing the settlement before then.

First, the settlement provided Cone with a significant victory before of the presidential election on March 5, which may have aided her re-election at the meeting. This might have affected Cone, who made no secret of her favor for Cone over her opponent, former US Soccer president Carlos Cordeiro, but it also could have impacted the players, who made no secret of their love for Cone over Cordeiro. (He was president at the time the players filed their case in 2019.)

Second, it essentially locked in the settlement in the event that Cordeiro won and did not agree with the conditions. According to rumors, the United States Soccer Federation’s board of directors has already agreed to accept the settlement conditions. Cone refused to comment on the specifics of the boardroom conversations, citing “executive session,” but the public disclosure makes it harder to reverse course in terms of public relations.

U.S. Soccer signed a new eight-year multimedia contract with Warner Media’s Turner Sports on March 1 for the English-language rights to both women’s and men’s national team matches. Despite the fact that there is no evidence that this media arrangement was reliant on the settlement, Warner Media may have chosen to wait until the settlement was revealed before announcing it. U.S. Soccer’s intentions to unveil the new contract at the annual general meeting would have been thwarted.

Cone and U.S. Soccer took a risk by abandoning their commercial rights contract with Soccer United Marketing in May 2021 in order to market the media rights alone. Cone scored another victory before the election by doing this and declaring it ahead of time.

Approval of a settlement by the courts

There is one legal reason for not waiting and announcing both the settlement and the new CBA at the same time: under Rule 23 of the Federal Rules of Civil Procedure, a class action settlement must be approved by a District Court judge after a hearing to ensure that it is “fair, reasonable, and adequate” and “treats class members equitably relative to each other.” Because the settlement and the CBA are between distinct, but overlapping, organizations that include both current and past U.S. women’s national team players, the court may have a concern regarding the allocation of resources between the two.

This is where the lovely game resides. Stream the best leagues, tournaments, and teams in the world. To watch soccer on ESPN+, sign up today.

The prize money for the World Cup would be the most probable place for such. Other nations that have announced equal pay agreements for their national teams have often addressed the issue by allocating equal percentages rather than equal dollars. For example, Australia stipulates that each team gets 40% of the prize money given out by FIFA in the tournament in which they qualify, but because to the differential in prize money between the men’s and women’s World Cups, the actual money awarded to each team varies significantly. Norway agreed to a 25% cut, despite the fact that the head of the Norwegian Players Association admitted that “technically, it’s not at all equal.” Brazil did not define its percentage, just claiming that it would pay “proportionally similar” sums, whilst Ireland opted to omit prize money from its equal pay agreement.

What’s next for the USWNT and the US Soccer Federation?

It shouldn’t diminish excitement for the settlement if the CBA condition was just a scheduling problem due to other developments. If it represents underlying difficulties in establishing a long-term equal pay agreement, however, the jubilation over the settlement may have been premature. This is true whether the parties agree to a less-than-satisfactory CBA or fail to reach an agreement at all.

Although a settlement would end the legal battle between U.S. Soccer and this group of players over alleged legal violations that occurred during the lawsuit’s time frame, it would not bind the players or the USWNT Players Association, which was not a party to the lawsuit, to any future legal violations. In this situation, the risk is that a CBA that falls short of the players’ aspirations for equal compensation would just help to create the groundwork for the next legal action.