The Cincinnati Bearcats were the last team to beat Alabama. Now, they’re still considered an underdog for tonight’s semifinal matchup with Clemson because of their 1-4 record against the Tigers in 2018. But does the label only provide motivation if you win? 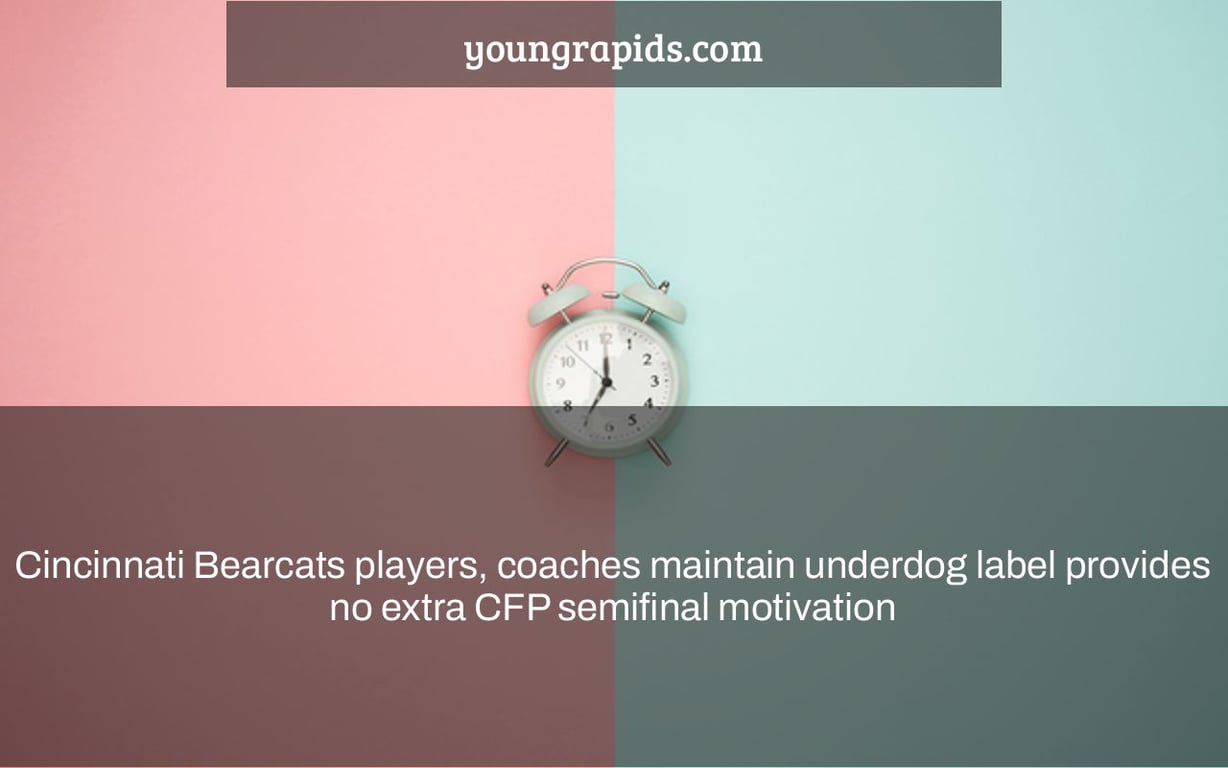 Cincinnati’s players and coaches downplayed the relevance of the underdog moniker in the Bearcats’ upcoming College Football Playoff Semifinal game against Alabama at the Goodyear Cotton Bowl Classic in Arlington, Texas, on Friday.

The Crimson Tide are a 1312-point favorite against the Bearcats, who are 13-0 this season and have won 23 of their last 24 games going back to the conclusion of the previous season. The lone defeat throughout that time was a 24-21 loss to Georgia in the Chick-fil-A Peach Bowl, which they won on a 53-yard field goal with three seconds left to end the 2020 season.

Mike Denbrock, the offensive coordinator, said he hasn’t seen any more drive in the Bearcats.

Denbrock said, “Each child is going to have his own little motivating thing.” “As a football squad, I believe we’ve earned our place here.” We feel and know we belong here, so if any further incentive is required to get these men ready to play, the challenge that will be standing across the field from us will suffice. That is something that deserves and receives our complete attention.

“I believe that some people overlook the fact that this group of seniors, and in especially this football team, accomplished everything that was expected of them to come to this position. They’ve been victorious 13 consecutive times they’ve taken the field, and we’re well aware of how tough it’ll be, how much of a battle and struggle it’ll be, but one that our players will be prepared for.”

Senior quarterback Desmond Ridder, who has a career record of 44-5, was also added: “We’re thrilled to face Alabama and demonstrate not just ourselves, but the rest of the nation, what we’re capable of against a great team.”

Meanwhile, despite being a clear favorite coming into kickoff, Alabama star linebacker Will Anderson believes his team is still underdogs in the CFP semifinals, citing a lack of respect throughout the season.

On Monday, he told reporters, “I feel like we’re the underdog in this game.” “We’ve been treated badly for the last year.”

In the CFP era, just a few semifinal games have been close. Eleven of the fourteen were determined by a margin of more than ten points. Cincinnati is the first club from Group 5 to qualify for the playoffs.

“I’m not concerned about the amount of attention we’re getting,” junior offensive lineman Dylan O’Quinn said. “We’ve all heard the David vs Goliath debate, but the truth is that everyone puts their trousers on the same way. We simply want to go out and be ourselves since everyone else is playing football.”

Jerome Ford, a junior running back who started his career at Alabama before transferring to Cincinnati, believes the Bearcats don’t need to do anything “extra” simply because they’re the underdog.

“Just be ourselves,” Ford added. “I feel that just being us will be enough to establish that we belong here and should be here.”

After a three-game run against Navy, Tulane, and Tulsa in which the Bearcats didn’t play their best football, Cincinnati has won its last four games by a combined 88 points.