Oscar Robertson is one of the greatest players in NBA history, and he’s also a Sacramento Kings legend. But who are the 10 best scorers in Sacramento Kings history? Here’s a list to get you started.

Oscar Robertson is the best pure scorer in NBA history. Nobody will ever be better than him. 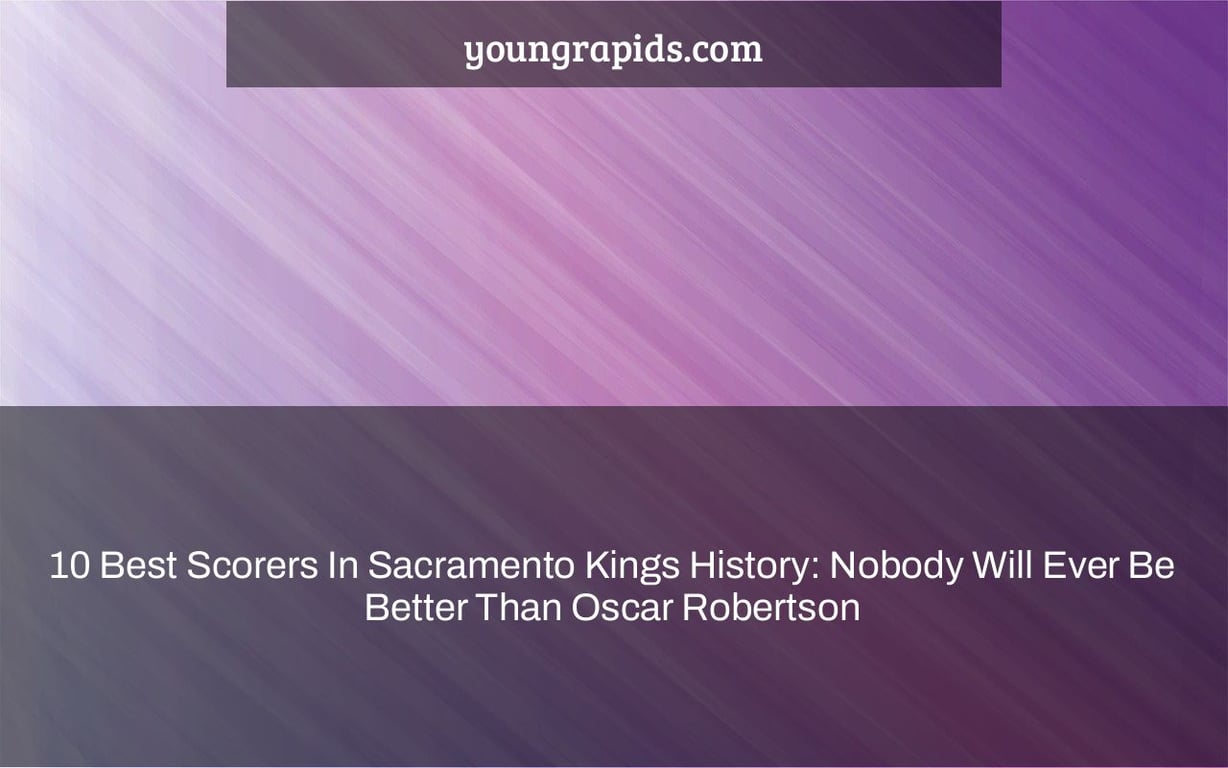 For the last 16 years, the Sacramento Kings have been a difficult team to watch, having failed to make the playoffs since 2006. Only DeMarcus Cousins has reached the All-Star Game since then, and he has been absent from the squad for five years. The majority of the team’s accomplishments can be traced back approximately 50 years.

For nearly six years in the late 1990s and early 2000s, Chris Webber was instrumental in the team’s success. There has only been one dominating player throughout history. He was also the first player in NBA history to average a triple-double in a single season. Oscar Robertson has never been better, and who knows whether anybody else in town will ever be.

These are the top-10 scorers in franchise history, along with Robertson, Webber, and Cousins.

The Raptors traded Gay, along with Quincy Acy and Aaron Gray, to the Kings on December 9, 2013, in exchange for Greivis Vasquez, John Salmons, Chuck Hayes, and Patrick Patterson. He equaled his career best for points against the Pelicans with 41 in his rookie season. He exercised his $19.3 million option to continue with the Kings the following year. Gay inked a three-year, $40 million deal with the Kings after scoring 40 points on Halloween. Gay averaged 21.1 points, 5.9 rebounds, and 3.7 assists in that season.

He had a season-high 36 points against the Bucks the following year. In December, he had his greatest overall game against the Rockets, scoring 17 points, adding 13 rebounds, three assists, one block, and a career-high six steals. Due to a complete rupture of his left Achilles tendon, his last season was cut short.

There was only one guy who could keep up with Bill Russell and Wilt Chamberlain when they were dominating the NBA, and that was Jerry Lucas. Lucas had a fantastic season in 1967-1968, averaging 21.5 points, 19 rebounds, and 44.1 minutes per game in all 82 games. In terms of rebounds and minutes, he was only second behind Chamberlain. Between 1964 and 1968, Lucas averaged 20.5 points and 19.8 rebounds per game in 308 games. Chamberlain is the only other player who has been around the “20-20 Club.”

In 1969, Lucas appeared in his sixth consecutive All-Star Game, but he began to feel isolated from the squad. The American economy tightened during that year, and Lucas’ investments suffered as a result. Due to financial losses in investments made via Lucas, he was forced to declare bankruptcy, and his reputation among gamers waned.

Carr had just completed a terrific senior season in college, averaging 22.5 points and 7.6 rebounds per game. The Pistons drafted him No. 8 overall in 1983 as a result of this. Carr was unable to reach an agreement on a contract, so he spent a season in Italy before joining the Hawks for six seasons until joining the Kings in the midst of the 1989-1990 season.

Carr was one of the team’s greatest players in Sacramento, averaging 20 points per game. That season, he scored 1,551 points, his only season in which he scored more than 1,000 points. It was also his most productive scoring season. Given that he scored 9,176 points in his career, it’s apparent that he had some of his best years in Sacramento.

Booner played in the NBA with the Kansas City Kings after the ABA-NBA merger. He was chosen in the dispersal draft by the Kings on August 5, 1976, from the Spirits of St. Louis. In his first season, Booner led the Kings in scoring with 22.2 points, 3.8 rebounds, 4.1 assists, and 1.5 steals while playing for Phil Johnson. Unfortunately, the squad concluded the season with a record of 40-42.

Boone averaged 17.7 points, 3.3 rebounds, 3.8 assists, and 1.3 steals the next season. Booner spent the next three seasons with the Lakers and Jazz before retiring after just five seasons in the league.

DeMarcus Cousins has been the top overall player for the Sacramento Kings organization since 2006. De’Aaron Fox may be argued for, but he has never made an All-Star squad. Cousins was an All-NBA player after accomplishing this feat three times. Cousins’ selection to the All-Star Game in 2015 was the first time since Brad Miller and Peja Stojakovic in 2004 that a Sacramento player has been honored.

Cousins made history in April 2015, when he had a triple-double of 24 points, 21 rebounds, and 10 assists in a defeat to Houston. He was just the fourth player in NBA history to record a double-double of 20 points, 20 rebounds, 10 assists, and 5 blocks in a single game. Only Kareem Abdul-Jabbar, Chris Webber, and Tim Duncan have accomplished this feat. The following night, he repeated the feat, joining Elgin Baylor and Wilt Chamberlain as the only players to accomplish it on consecutive nights. With nine triple-doubles, Cousins became the all-time leader in the NBA.

Birdsong was the No. 2 overall player in 1977 after finishing his collegiate career at the University of Houston. The Kansas City Kings picked him. In 1979, he had one of his greatest performances, scoring 30 points and dishing out 11 assists in a victory against the Cavaliers. Birdsong set a career best with 49 points in a victory against the Nuggets the next season, shooting 20 of 25 field goals.

His time with the Kings was cut short in the end. After the 1980-1981 season, the organization decided to move Birdsong in the summer. When he joined the Nets, his output dropped. Looking back, moving him was probably a sensible idea at the time.

During the 1991-1992 season, Richmond was moved to the Kings alongside Les Jepsen for the rights to Billy Owens after three years at Golden State averaging at least 22 points per game. Since the club relocated to Sacramento in 1985, Richmond has been the franchise’s brightest star. Richmond lasted with the Kings until 1998, and he had a fantastic seven-year career with them.

In each of his seven seasons, Richmond was the team’s highest scorer. He scored 21.9 points per game on average. Richmond was chosen to the All-Star squad from 1993 through 1998, and when the game was held in Phoenix, he was awarded MVP. Richmond was chosen for the United States Olympic Team (Dream Team III) in 1995, and he won a gold medal. He may be the finest real shooter the Kings have ever had out of all the scorers.

Medium is the source of this information.

Webber didn’t want to join the Kings because he considered them as a perpetual loser, yet the Kings were where he had his finest seasons throughout his Hall of Fame career. He came close to leading the squad to the NBA Finals at one time. Webber completed an overall excellent squad with Peja Stojakovic, Vlade Divac, and Jason Williams. He ended Dennis Rodman’s seven-year reign as rebounding leader, and two years later, he reached his scoring best.

The Cincinnati Royals selected Archibald in the second round of the 1970 draft. Archibald’s career took off in 1972-1973, when he led the league in scoring and assists, becoming the first player to do it in the same season. Oscar Robertson led the NBA in points and assists per game from 1967 through 1978, but he didn’t win the championships since they were based on totals rather than averages at the time. Archibald’s 34.0 points per game at the time broke the NBA record for a guard, and it remains the record for a point guard as of 2020.

His 910 assists set a new NBA record, surpassing Guy Rodgers’ previous high of 908. That season, he was awarded the NBA MVP by Sporting News. Despite all of this, Archibald isn’t even the team’s best point guard. Someone else will get that honor.

Robertson provided the NBA a cause to pay attention to the Kings while they were situated in Cincinnati. Robertson had a triple-double in his NBA debut, with 21 points, 12 rebounds, and 10 assists. He averaged 30.5 points, 10.1 rebounds, and 9.7 assists in his debut season. With 30.8 points, 12.5 rebounds, and 11.4 assists the next season, he became the first player in league history to average a triple-double in a season. He’d also shatter Bob Cousy’s season assist record and join Johnny Green and Elgin Baylor as the only players in league history to collect 900 or more rebounds in a season with a height of 6-foot-5 or less.

The Sacramento Kings have scored the most points in franchise history.

The 10 players with the most points in Kings’ history are shown below.

In the history of the Philadelphia 76ers, the following are the top ten scorers: Wilt Chamberlain is 0.01 points better than Allen Iverson.

In the history of the Los Angeles Clippers, the following are the top ten scorers: Free Leads, World B. Second and third place go to Bob McAdoo and Kawhi Leonard, respectively.

Charles Barkley and Devin Booker are among the top three scorers in Phoenix Suns history, but they aren’t the best.

The “sacramento kings roster” is an article that lists the 10 best scorers in Sacramento Kings history. The article also includes a list of players who have never been better than Oscar Robertson, which nobody will ever be better than.